After a big block of four tough 100+ mile weeks through January, it was time for the first big fitness tester ahead of Manchester – the Worthing Half Marathon. I’ve ran Worthing every year since it began in 2016, and the race has always been good to me. In 2016 I surprised myself by going sub-90 for the first time, and in 2017 I ran 1:23 exceeding all expectations. I was therefore hopeful of another good performance on the fast, flat course.

The week leading up to the race had been a bit of a rollercoaster. I had a great long run the previous Sunday, where I ran 24 miles averaging 6:41/mi (faster than my current marathon PB pace!) with 10 x 1 mi at goal marathon pace feeling controlled and with my heart rate well within the marathon zone. However right at the end I had to take evasive manoeuvres to avoid a dog, and felt a twinge in my left Achilles. It was slightly achy for the rest of the day, so I rolled my calves and hoped it wasn’t anything to worry about.

The next morning my Achilles felt quite stiff, although it eased off as I walked about and felt fine on a short five mile recovery run. It did feel tight for the rest of the day though, and this pattern repeated on Tuesday with a 7.5 mile easy run. While it wasn’t getting any worse, and wasn’t really painful, I was still concerned that something wasn’t right, and that it had the potential to develop in to something more serious. Therefore on Wednesday I took the rare step of having a complete day off running. It was very hard, but I knew it was the right decision long term, and I wasn’t going to lose much, if anything, missing one run.

On Thursday I headed up to Warrington for a training day with Men’s Running for the “Big Marathon Challenge” I’m part of this year. ASICS brought along a physio, dietician and sports psychologist from their Pro Team to chat to us, give individualised nutrition advice, carb loading plans, etc. We’ll have access to them all the way up to Manchester which is a huge privilege. My diet certainly has plenty of scope for improvement!

The physio, Sarah Connors, quickly identified the issue and worked her magic on my leg. Basically she thinks my gymnastics avoiding the dog on Sunday jarred my ankle. I had almost no lateral movement in it, which was then putting pressure on the Achilles. After a few minutes of massage it felt transformed. I did a short run around the track which was fine, and the next day happily did 10 miles along the canal without issue. I was therefore hopeful the problem was sorted, although mindful that a hard half-marathon could flare something back up. 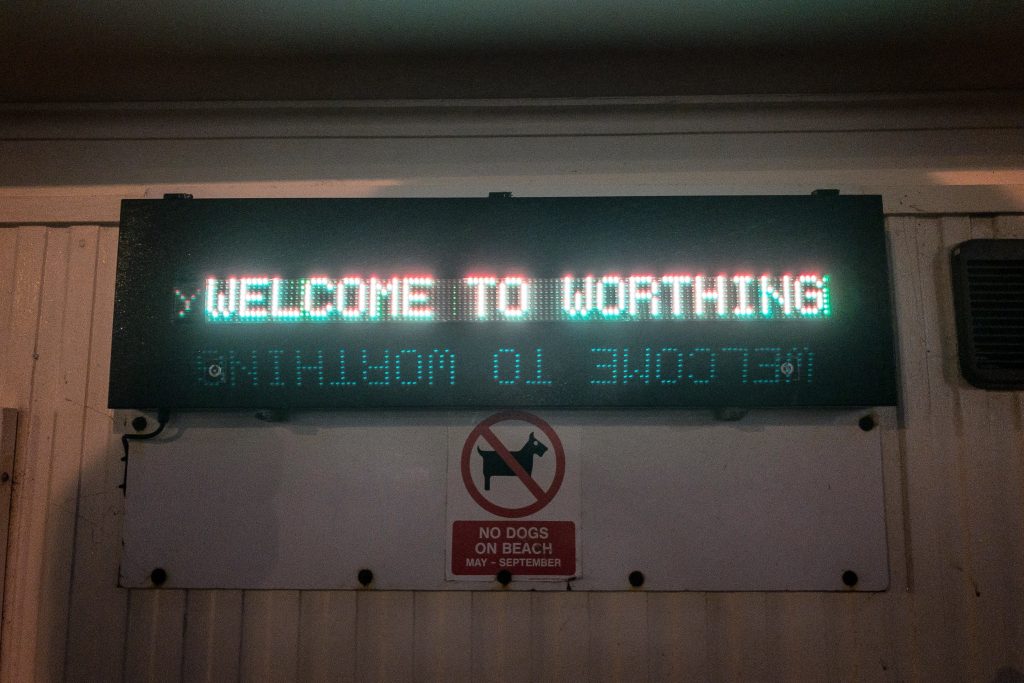 I arrived at Worthing far more tapered than I had planned, but recent training pointed towards me being in PB shape, so I was hopeful I could still put in a good performance. I didn’t really mention it to anyone beforehand – as I didn’t want to put too much pressure on myself, and wasn’t sure if I was being overly ambitious – but I had a feeling that based on the paces I was achieving in training versus last year, something around 1:18 might be possible if things went well.

Unfortunately the weather had other ideas – on Saturday when I arrived it was wet and very windy, with the forecast not much better for the following morning. I headed out for a short shakeout on Saturday evening which was utterly miserable, and didn’t inspire much confidence about how the next day might go. Nonetheless I tried to stay in the zone and amped up ready to do my best no matter the conditions. 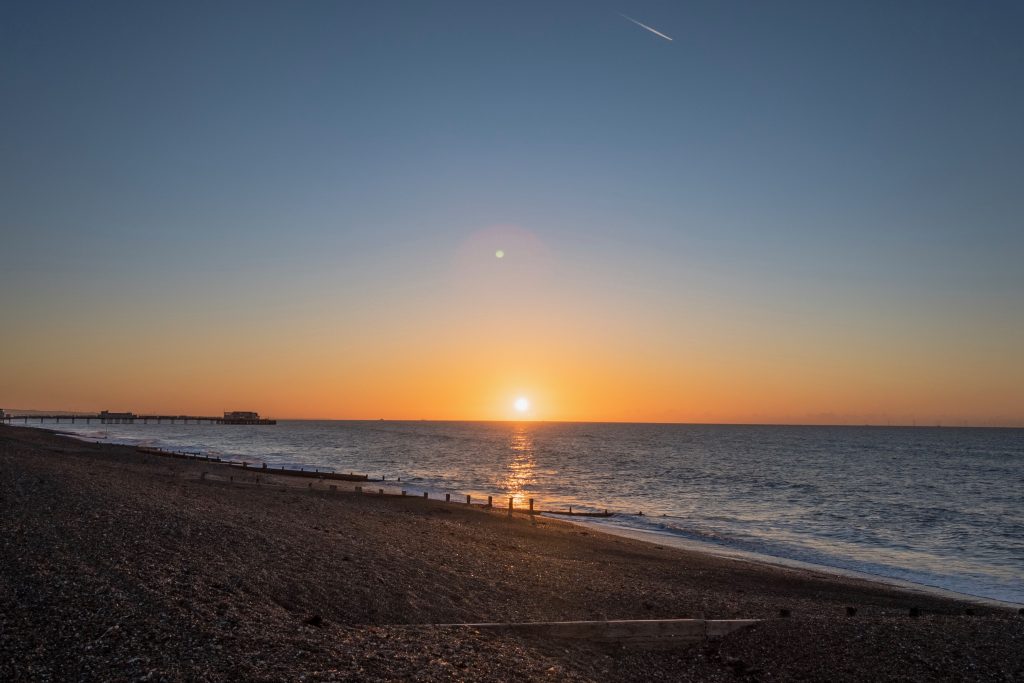 On Sunday morning the rain had cleared and it was a beautifully Sunny morning. Unfortunately the wind remained, with a strong 20 mph breeze (30 mph gusts) coming from the west. This meant miles 8-10, where you head out along the exposed seafront straight in to that wind, were going to be very tough. I therefore formed a plan – get to the seafront still feeling under control, try my hardest not to lose too much time while battling the wind, then hopefully have enough in reserve for the final three miles to make up some of the lost time once the wind was behind me.

I lined up towards the front and we were off. The first mile headed out in to the wind, but as there were plenty of other runners around at this point it didn’t feel too bad. I tried not to worry about pace too much, and just concentrated on settling in to a good rhythm at a pace that felt manageable. Through the first mile in 5:49 – faster than I’d have planned but relatively conservative given my tendency to go out too fast. 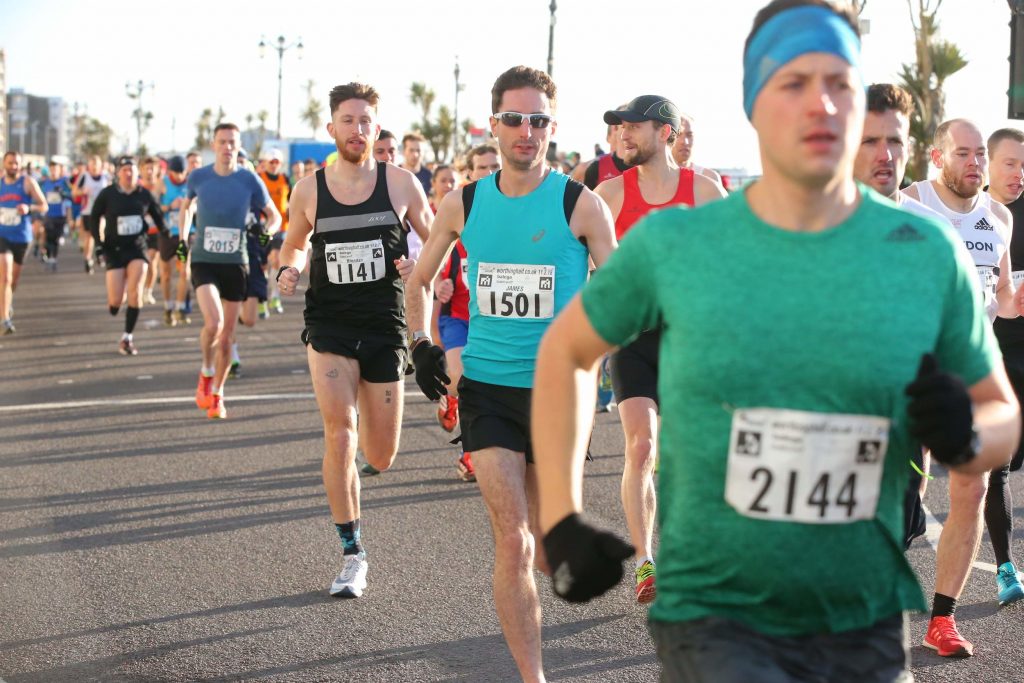 The second mile took us back down the way we’d come, the wind now thankfully behind us. The field was stringing out but there was a small group of 3-4 runners ahead so I tried to stay with them without pushing myself too hard. Thankfully I just about managed it, as I didn’t want to be stranded on my own at this early stage. 5:53 for mile two.

We then headed up in to the town for five miles weaving around the streets of Worthing. Being off the coast provided a little protection from the wind, and while you could still feel it when heading west it wasn’t too bad. I just zoned out and concentrated in keeping the effort right for this section, knowing what was to come once we were back on the coast. 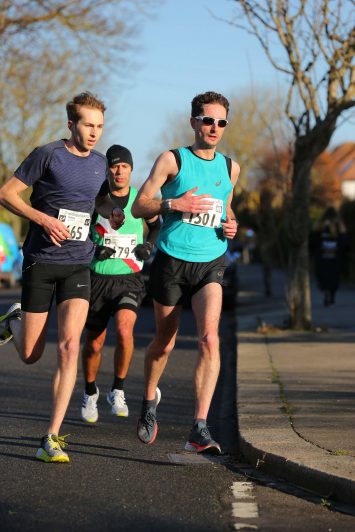 I know from past experience that in a half-marathon I need to be breathing on a 3:3 pattern for as long as possible, with a switch to 2:2 before half way meaning I’m overcooking it, so I spent most of these five miles counting to three repeatedly. Happily the breathing was staying to this pattern and the pace was ticking along nicely – 5:57/6:01/5:58/6:01/5:57. I was right on 1:18:00 pace, and hopeful I had judged the effort right so I would still be able to fight the wind as best I could.

We turned the corner on to the seafront and the wind hit me like a brick wall. It was brutal! The other couple of guys who were running with me seemed to slow so I made the decision to push on ahead, conscious that I didn’t want to give away too much time in this section. It was a real mental battle keeping the effort up when at times the gusts felt like they were stopping you dead. I just tried to concentrate on getting to the next mile marker. 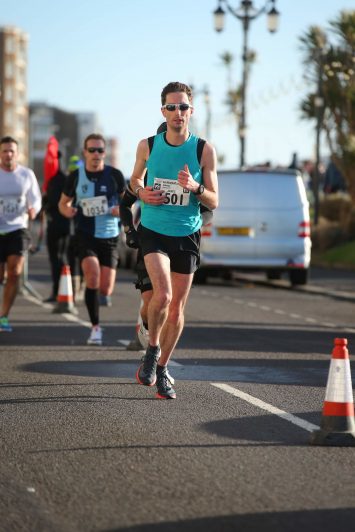 My splits for this section were 6:15/6:26/6:17, so I’m quite pleased with how I manged to keep the pace up. Everyone else I’ve seen on Strava slowed by at least this much, including the winner Paul Martelletti, who knows a thing or two about running fast! There was only one other guy with me for most of it, and while he did move ahead a few times I was facing the brunt of the wind for most of the three miles. It was frustrating seeing the slower splits but I knew that if I could just make it to the turnaround point the final three miles would be wind assisted and I could still achieve a big PB.

After what felt like a lifetime we reached the turnaround point and the wind was finally behind me. It was now time to try to make up a little of the time lost, although I was careful to ramp things up as I didn’t want to hammer mile 11 and then run out of steam at the end. I gradually turned up the pace, running 5:55/5:50/5:42 for the final three miles. I was really pleased with how strong the legs still felt at this point, and while I was working hard I knew I’d judged the effort well. 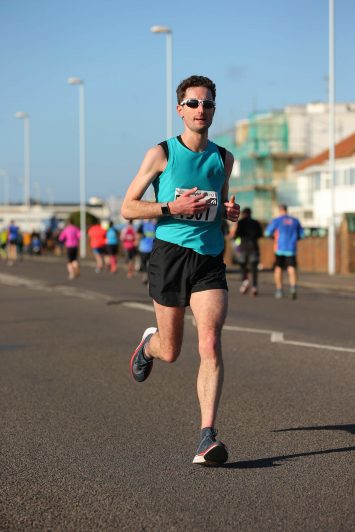 As the finish line came in to sight I hammered my legs as fast as they would go, eager to ensure I got the best time I could. I managed 5:12/mi pace for the final 0.1 and crossed the finishing line in 1:18:53 – a 1:37 PB! Not bad given Oxford was only four months ago…

Overall I’m massively pleased with my performance. I didn’t let the weather become an excuse for not trying, and prepared myself mentally to ensure I was ready to deal with it during the race. I judged my effort well, not overcooking things early on, which meant I still had the energy to work against the wind and then try to make the most of the tail-wind at the end. Given how good I felt at mile 7, and how I was able to ramp up the pace towards the end, I’d like to think I could have been around 1:18-dead, if not faster, in better weather. 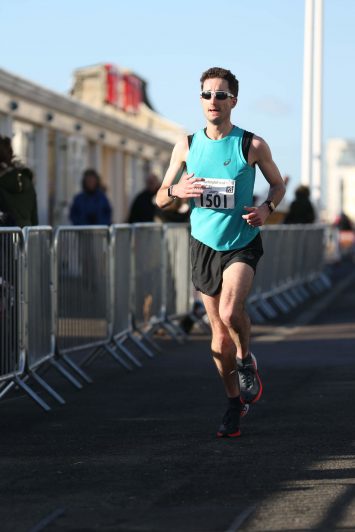 It’s a nice confidence booster that my high-mileage approach to training is working well and still yielding big fitness gains. Running high mileage is always a bit of an exercise in faith, as I will often struggle to even achieve HM pace during threshold runs. You just have to trust that the training is doing its work, and that once tapered the legs will be ready to fly. I’ve gradually learned to accept this, and worry less about how fast I can run in training. After all, it’s the races that matter!

I keep expecting to plateau, but so far I’ve continued to take large chunks of my PBs. I’d never have believed I would have taken nearly five more minutes off my HM time this time last year. I’ve no doubt I will eventually get to a point where the times stop falling so rapidly, but I’m excited to keep pushing myself to see where I can get to before that happens.

Having ran Worthing last year, with a similar training load beforehand and a similar taper, it therefore hopefully provides quite a good indicator of what might be possible at Manchester. Last time I turned 1:23:31 in to 2:57:19 at Brighton. If I can manage the same conversion factor – and given I’ve had another year of solid training since then I’m hopeful I can – Sunday’s time predicts 2:47:14 at Manchester. If I’m right about how I’d have done given better weather, I’d be in the 2:45 range.

Nothing is a given, and clearly I have lots of work still to do in the next eight weeks. However, a 2:45 marathon certainly feels less like the pipe dream it did a few months ago… 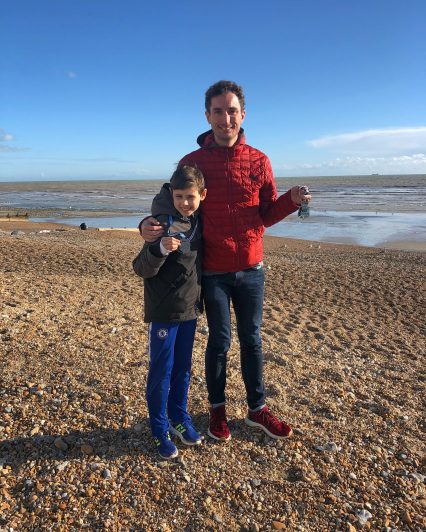