After the excitement of the Oxford Half I had just two weeks to recover, and then keep the fitness ticking over, for my final race of this summer/autumn training block – the Great South Run. I hadn’t raced 10 miles for two years, having ran my last couple of 10 milers as marathon pace training runs. My legs recovered pretty quickly from the exertions of Oxford, definitely helped by my Nike Vaporfly shoes which don’t beat up the legs as much as traditional racing flats do, so I was keen to put in a good performance and perhaps even break the magical 60 minute barrier.

I was unsure exactly how to deal with the two weeks between Oxford and the GSR. Clearly there was little scope for lots of heavy training, but I knew at the same time that if I took things too easy I risked arriving in Portsmouth feeling a little flat. I decided to firstly see how things went as I recovered through the week, and then perhaps do a short session on Saturday just to keep the legs ticking over if I felt up to it.

By Saturday I was feeling well recovered so headed up to the track for a short 5x800m sharpener. I originally planned to run at 10K pace, but ended up hitting 5K pace without trying too hard, which was a positive sign. All the efforts felt nicely under control and I stopped after the 5th rep feeling like I could have easily done several more at the same or faster pace, so I was happy I had got the balance just right. I then gradually eased back the training again as I headed towards the Sunday of the race.

While my body seemed to be ready for another good performance, the weather unfortunately had other ideas and the spectre of “Storm Brian” loomed over the weekend of the race. Winds of up to 60mph were forecast on Saturday, which led to the cancelation of the 5K support race, and while it was predicted to ease a little for Sunday it was still likely to be very windy on race day. Given that the GSR is already famous for a nasty headwind in the final few miles even at the best of times, this didn’t bode well…

By the time I arrived in Portsmouth on Saturday I was feeling a little deflated at the thought of my sub-60 attempt being ruined by the weather before I even ran one step. I nearly didn’t bother going out for my traditional 3 mile shakeout run the day before, but had a bit of a word with myself, and remembered all the hard work I’d put in to get to this point. While the conditions meant I probably wouldn’t perform as well as I could, it’s was still a good opportunity for a PB and also good practice at gritting things out. I forced myself out the door, and after my shakeout run I felt a lot more positive, and ready to take Brian on.

Sunday morning was sunny and mild, although sadly the wind hadn’t magically disappeared overnight. I didn’t have to get up too early as the start was at 10:35, and after my usual breakfast of bagels and jam, plus plenty of coffee, I jogged down to the seafront. The start area was very well organised, and most importantly there were plenty of toilets meaning I only had to queue for about 10 minutes. I then headed down to the start line to get a decent spot towards the front of my wave. The elite women were set off first, and before long it was our turn to head out in to the wind. 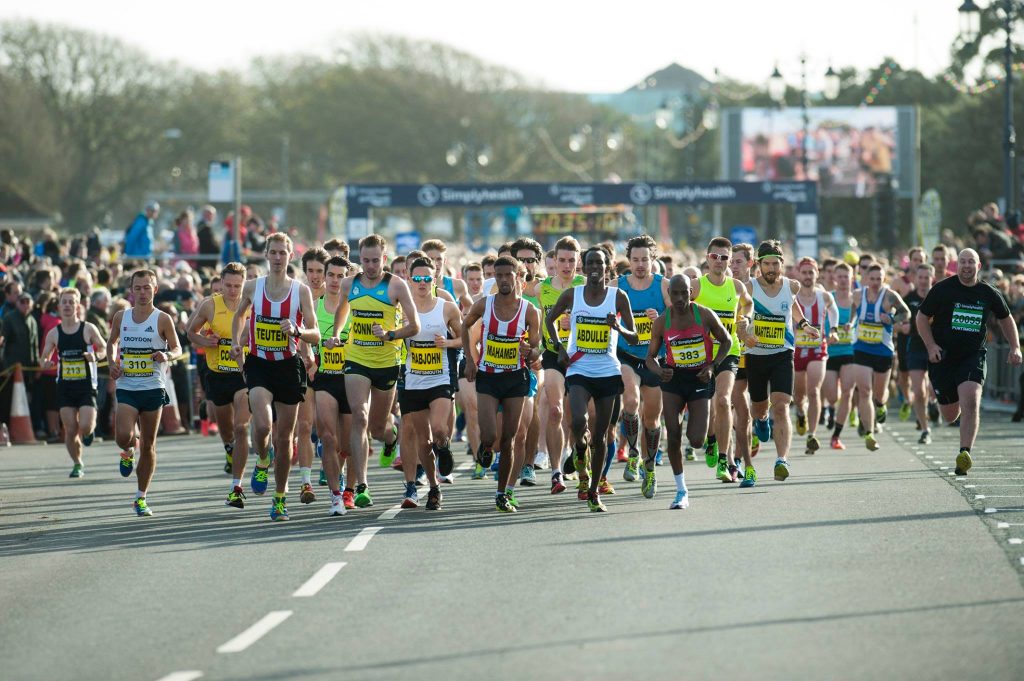 The first mile was a bit hectic as everyone settled in, and there were quite a few people who were much too far forward for the pace they were running at. However by the time we had moved away from the seafront things calmed down and I was pleased to see I was running right on 6:00/mi. We were heading in to the wind we’d also face in the final two miles at this point, so to be comfortably running target pace was reassuring, although I knew there was still a long way to go.

We weaved our way north-west passing through the historic dockyards and past the enormous new aircraft carrier HMS Queen Elizabeth, and I ticked off the first three mile markers in exactly 6:00 each. So far so good! The legs were feeling strong and I could tell I was having one of those days where everything just feels smooth. However, I knew the famous headwind of the last two miles awaited, so was careful to keep a little in reserve and not get too carried away. I was disappointed not to find many people to run with – I was either passing them, or they were passing me – but at this stage that didn’t matter too much.

We had now arrived at perhaps the dullest part of the course as we headed out and back along a dual carriageway. I hit mile 4 in 6:01, still right on pace, and was then surprised to hit mile 5 in 5:56, although I think the markers here may have been slightly out based on my next split. Regardless, I was through halfway pretty much on target and eager to enjoy the tailwind for the next few miles before the real work started. At the back of my mind I knew maintaining this pace given what was coming was unlikely, but I was happy that I had controlled things nicely in the first half to at least ensure I had some energy left for the tougher second act. 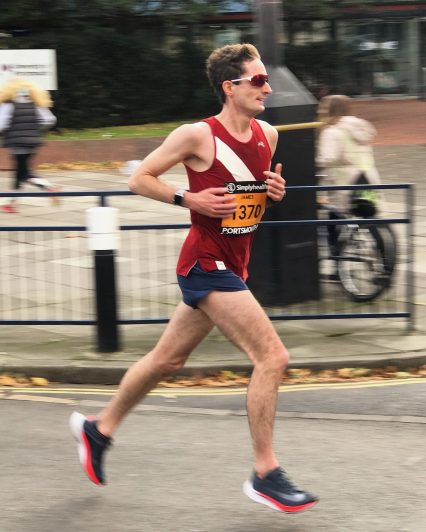 Mile 6 agonisingly takes you right by the finish line, but unfortunately there was still plenty of running to do before I saw it again. I hit the mile 6 marker in 6:17, which slightly panicked me but I think the combination of slightly dodgy markers, the wind easing, and the people near me slowing, meant I slightly lost concentration and allowed the pace to drop slightly. I pressed on and was pleased when I then came through mile 7 in 6:00-dead again. I was still feeling strong both physcially and mentally which bode well.

I knew I now had one more mile before rounding the corner on to the seafront and facing Storm Brian for the final fifth of the race. I began to mentally prepare and steeled myself for what was to come. I hit mile 8 in 6:04, and was initially pleasantly surprised as the wind didn’t seem too bad when we came around the corner. However, little did I know we hadn’t quite turned fully around, and when we cleared the next corner the full force of the wind hit. Oh fuck!

I was initially pleased to find I was with a few other guys who I could hopefully work with against the breeze, but it quickly became clear they were slowing so I took the risk to push on by myself. At times the gusts made it feel like I was being held stationary, but I just pushed on as hard as I could repeating the famous Steve Way mantra “don’t be shit” over and over in my head. Although sub-60 was now firmly out of the window, I was actually quite pleased to hit mile 9 in 6:17, slowing far less than I had feared I might, and resolved to keep the effort up to the end. 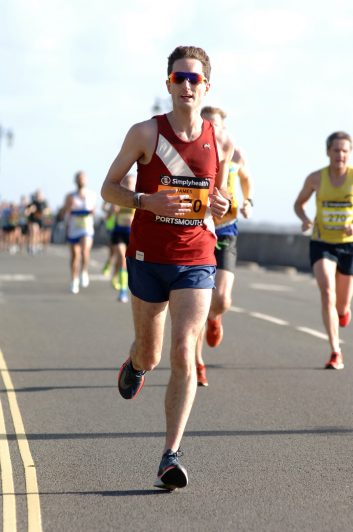 The legs were still feeling very strong, and I seemed to have managed my effort just right as I was coming past quite a few people who had slowed much more than me in this final stretch. It was a shame that other than while briefly passing people I was out on my own, but unfortunately finding a group to run with is always a bit luck of the draw. I could see the pier at this point which I knew was roughly where the finish line was, but much like the Brighton Marathon once you actually reach the pier, you still have a depressingly long way to go before you reach the finish line.

I soldiered on, and slowly ticked off the 800m and 400m to go signs, although with the wind those distances felt at least double. As I rounded the final corner with 200m to go I glanced at the time on my watch and realised that with a bit of a sprint I might be able to duck under 1:01. I somehow managed to muster 5:20/mi pace despite the crazy wind, and passed the finish line in 1:00:59 to just sneak under 61 minutes. 123rd overall including the elites. 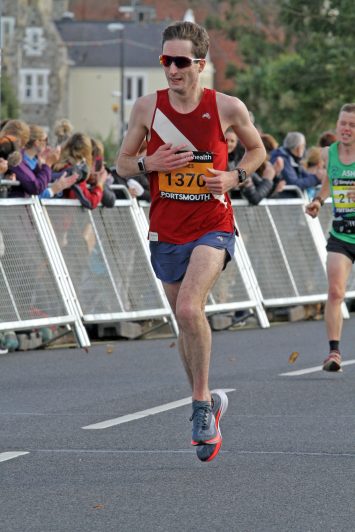 While I’d like to think I had sub-60 in me if the conditions were better, I’m still very happy with the performance. I didn’t allow the weather to affect me mentally, and I paced myself very well, keeping a bit in reserve to ensure I still had something left for those final few miles. I was really pleased I only lost ~15s/mi in that headwind. I passed quite a few people in that final slog along the seafront, while not being passed once if I recall correctly.

Overall then, not a bad autumn of racing with PBs at 5K, 5M, 10K, 10M and half-marathon over the last seven weeks! At the start of this training block I never thought I would be running a low-36 minute 10K, or troubling 1:20 for the half and 60 minutes for the 10M. It’s pleasing that another block of high mileage training has seen me take another big leap in fitness, and the fact I am still making such big jumps makes me hopeful there is plenty more to come.

I am now taking a week off running to give my body a bit of a break, as although I’ve not run a marathon this autumn I’ve done a lot of high mileage weeks and racing. My thoughts inevitably turn to next year now, and the London Marathon. My recent times suggest I am theoretically in around 2:50 shape at the moment, so with another block of marathon training I think I have a real shot at going under 2:50 at London. I have plenty of ideas around my training for London, and a plan is already forming, but I will talk about that in a future post.

Before then I have a couple of 10Ks in November where I’m hopeful I might be able to sneak under 36 minutes. I’m going to stick to a slightly lower mileage of perhaps 60-70 miles a week, but get to the track regularly and hopefully add some top end speed to the endurance I’ve built up over the past few months. This will then hopefully see me ready to jump in to marathon training already in decent shape.

It’s been an amazing year for my running, and I’m massively excited and motivated to see how much further I can go…