Sunday saw the sixth running of the Brighton Marathon, now the UK’s second largest marathon after London with 10,947 starters. This was my second marathon and my second time in Brighton. Training had gone well – I followed the Pfitzinger and Douglas 18 week, 55-70 mile plan from their book Advanced Marathoning. Aside from a cough over Christmas that forced me to miss a few runs and slowed me down on a few others I had done every run and finished every session. I’d taken over four minutes off my HM PB and 25 seconds of my 10K PB whilst in the middle of peak training weeks, and I was confident I was in good shape to take a big chunk off my 3:33:42 time from last year.

I arrived in Brighton on Saturday morning and headed straight to the expo to collect my race number. There were no queues and I was delighted to find I had been assigned number 123! I had a quick browse around the stands at the expo but it was the usual rubbish so quickly made my escape and headed for our AirBnB apartment where I did as little as possible for the rest of the day! I did a short 5k jog along the seafront early evening just to stretch the legs out, and felt nice and fresh. After a nice big pasta meal I headed to bed early feeling surprisingly relaxed about everything.

I got to sleep quickly and had a good nights sleep, waking at 6am to a beautiful sunny morning, feeling ready to go. I had my usual breakfast of porridge and coffee, and slowly got ready before getting a lift from my friends to the outskirts of Brighton for the start of the race. This year I was able to get a place at the “fast” start in Withdean Park, owing to my two sub-90 half marathons. This made for a much quieter, more relaxed start compared to the mass start at Preston Park, and had the benefit of much shorter toilet queues and a downhill, less crowded first mile versus the rather steep hill you have to deal with as you circle Preston Park normally.

My goal for the race was 3:05, and my plan was to head out around 7 min/mi which would build a small cushion allowing for a fade in the final few miles. I also knew the first few miles down in to Brighton could be fast due to everyone around me and the downhill, so wanted to make sure I went no faster than 6:50. The starting horn went and despite deliberately placing myself towards the back of the corral I passed the start in just 15 seconds. I quickly settled in to a comfortable groove and went through miles 1 and 2 in 6:52 and 6:55 feeling very relaxed as we headed down in to Brighton.

As the course flattened out around Brighton Pavilion and the nearby gardens I settled in to my goal pace and went through 3-6 in 7:02, 7:06, 6:59 and 7:02. Unfortunately I wasn’t really concentrating as we passed the water station at mile 5, and only realised it was the first energy gel point when it was too late to move across and grab one. Never mind, I just made a mental note to make sure I kept an eye out for the next one at mile 10! Before I knew it we were out on the main coast road and through 10k in an official time of 43:23. The road contains a few short hills along this section so I tried to ride them out without losing too much pace but also without getting my HR too high. This seemed to work well and I was soon up in to Ovingdean and looping back towards Brighton – 7:00, 6:57, 7:02, 7:06. I also remembered to grab the gel at mile 10! 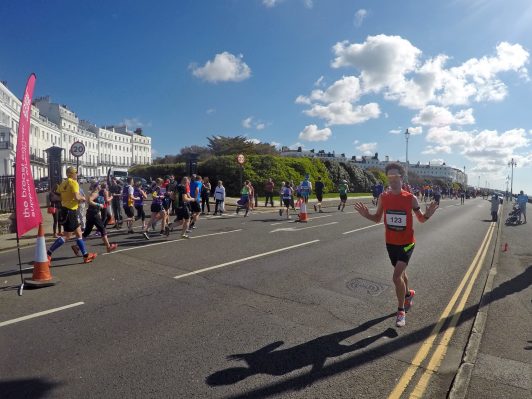 As I headed back west towards Brighton the sea breeze was working against me, and I unfortunately found myself somewhat out on my own with a few runners about 20m ahead and no one close behind from what I could tell. While the wind wasn’t strong I definitely felt it and wished I had a few people around me to work with. However I still managed to maintain pace and heart rate as I made my way down past the marina and in to Brighton in 7:06, 6:58, 7:00, passing halfway in 1:31:58.

At this point the course cuts up away from the seafront for an out-and-back along Church road. Up until this point I’d felt very smooth and comfortable, but I did start to become aware of my quads which were starting to ache slightly. This surprised me as on long runs I’d never had any kind of quad fatigue, but tried not to think about it too much. At mile 15 I grabbed my second energy gel and tried to press on. However things were already starting to feel a little harder than I would have liked, my stomach wasn’t feeling too great, and with the hardest section of the course coming up I was getting a little concerned. Miles 14 to 19 went 7:02, 7:09, 7:09, 7:08, 7:23, 7:14.

I was now heading out towards the Shoreham power station, the most dreaded part of the course as you wind through an industrial estate with very little support and the occasional waft of rotting fish. Not great at the best of times, but my stomach was now starting to cramp causing me to slow. I saw my average pace drop below the magic 7:03 required for a 3:05 finish and really lost heart. Knowing 3:05 was gone I mentally gave up a bit, and started to walk the water stations and not push as hard as I could have while running, despite the stomach cramps. Every time I stopped my quads also started complaining more, so it became a slightly vicious circle. The splits say it all – 7:35, 7:53, 8:03, 8:17, 8:21 up till 24 miles.

At this point I had stopped even thinking about finish times I just wanted the race to end. However the crowd support in the final few miles is really incredible (including our very own DarrenL, cheers Darren!) and with their help I managed to muster the will to at least keep running for the final two miles. As I passed the pier I knew the end was close so tried to push and somehow got myself close to my original goal pace for the final stretch. Last splits were 8:12, 7:48 and 7:08 for the final 0.2. Official time 3:12:16, 299th place and a 21 minute PB. 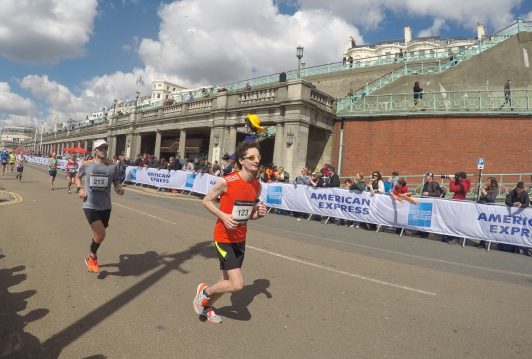 I was initially very disappointed with missing my target and fading so badly in the final six miles. However having had a few days to reflect on it, and having seen people’s reactions when I tell them my time, I’ve come to realise it’s still a decent time and a very big improvement to my PB. The marathon is a different beast to other races, and everything has to come together to have a perfect run – Sunday perhaps just wasn’t quite my day. Despite the disappointment I’m also looking forward to getting back to training after I’ve had a bit of a break and my legs have recovered, it definitely hasn’t dampened my motivation.

There are certainly plenty of lessons to learn from the day. I really need to work on my mental preparation so I’m not so fixated on one single goal – giving up so easily after 3:05 slipped away was a big mistake and I might have still managed sub-3:10 if I’d have dug in. I need to have a think about nutrition – I completed my first marathon with just energy drinks, and no stomach cramps, and would have done the same this year but unfortunately they were only offering gels and “High-5 Zero” which is carb free. Frankfurt give out energy drinks I believe, so I might try switching back to using just those.

I also want to adapt my training a bit – I clearly need to work on my quad strength so will be doing plenty of hill sprints over the summer, and I might try some slightly longer marathon pace runs. Pfitzinger tops out at 14 but I might try 16 or even 18, and probably not in a race as that will also be good mental preparation. Finally, I also need to take race calculators with a pinch of salt when it comes to the marathon – my short race times all pointed to 3:05 on most calculators, but clearly I need to be a little more conservative. Thank god I didn’t aim for 2:59 as I was tempted to at one point!! 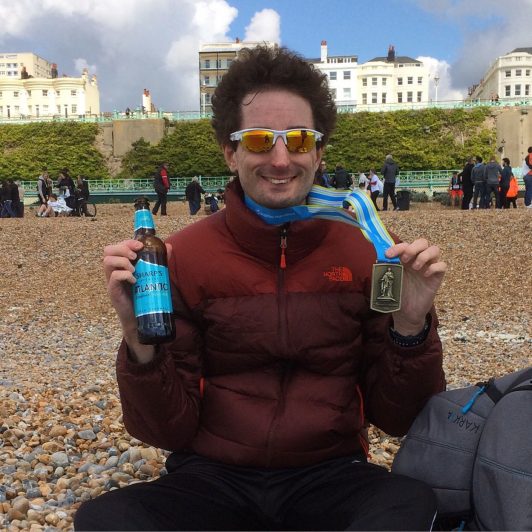