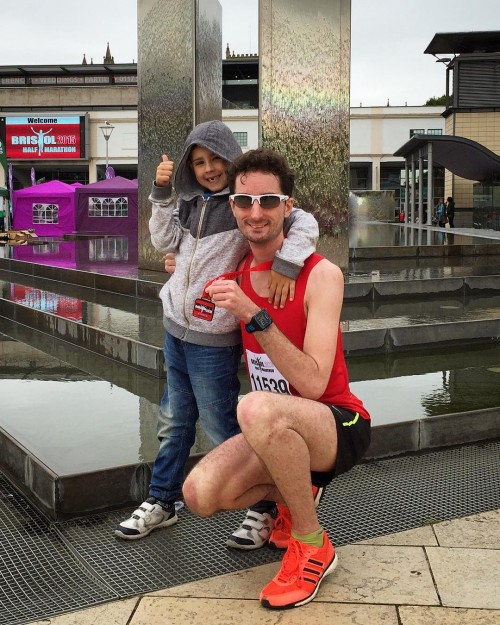 After the Brighton Marathon I briefly flirted with the idea of doing an autumn marathon, but in the end decided to work on my half marathon PB, quickly settling on the Bristol HM owing to its good reviews and having friends who live in the city.

I was a little late starting proper HM training, missing the first few weeks of the Pfitzinger 46-63 mile per week HM programme from his latest book, although I was still putting in some reasonable mileage and long runs. However over the past few months I’ve managed a solid 50-60 miles per week following the plan closely, and improved my 5K and 10K PBs. I therefore went in to the race feeling good for another PB.

Weather was good, largely overcast and cool with just the slightest breeze. The race is split in to two starts, and with two separate race villages meaning it never felt too crowded and toilet queues were short, helped by the fact there are a lot of bars on the harbourside whose facilities you can also make use of. I didn’t use the bag drop as I had friends and family with me, but it seemed well organised from what I saw.

The race started dead-on 9:30 and after a rather speedy 6:42 first mile I settled in to a good rhythm hovering around 6:55 pace as we headed out and back along the Avon Gorge. Crowd support was minimal here as you might expect, but the views were scenic and the miles ticked away nicely. There was a slight breeze on the return leg so I did my best to draft other runners, and overall was feeling really good.

After nine miles we were heading back in to Bristol via a rather dull road along the Avon, and then by mile ten we were hitting Queen Square and the city centre. Crowd support was great around here, but unfortunately the course became a little twisty and undulating, and I developed a stitch on my right side. I never normally get stitches so it was rather annoying to develop one in the middle of a race! As well as feeling uncomfortable it was making by breathing a little constrained, and unfortunately my pace dropped to 7:20/mi.

The stitch wouldn’t shift and breathing felt a little laboured but I just tried to knuckle down and keep my legs turning as fast as I could. There were a couple of short, sharp inclines in the last few miles which were rather unwelcome, but thankfully I soon had the finish line in sight. My parents and nephew had managed to locate themselves 20m before the start line so a quick high-five from my nephew helped me forget the stitch and Strava says I sprinted the last 0.1 miles at 5:49/mi pace.

Chip time was 1:31:33 (annoyingly not the palindromic 1:31:31 my watch recorded) – 4:11 quicker than my previous PB so not a bad result although I do think I could have been 1:30:xx without that damn stitch! Overall a good race and definitely one I’d recommend and consider doing again. Very well organised and a good course although the slightly twisty, undulating final few miles are a bit annoying. And best of all Bristol has some amazing pubs to rehydrate in afterwards!