The Pride Run 10K was formerly known as the London Pride 10K, but renamed due to confusion around whether it was sponsored by a beer company. The race takes place in Victoria Park and is essentially three laps of the eastern end of the park along flat, tree-lined paths. Thankfully the paths are very wide (basically roads) so lapping slower runners wasn’t really an issue. It was a sunny day so the shade from the trees was very welcome.

I knew I was in PB shape after running my best ever 6x1000m intervals session on Wednesday, but I wasn’t sure quite what pace to aim for so planned to go out by feel and just make sure I was faster than 42:54, my current PB. There were target time boards at the start line so you could line up roughly in the correct order, and unlike almost every other race I’ve been to people generally seemed to put themselves in the right place.

The air horn went and the race started – the first km was fast as usual, and I passed 1km in 3:52. I briefly entertained the possibly of hitting 40 minutes, but quickly dismissed that as a little optimistic! The next few kilometres ticked by and I was pleased that my legs felt pretty good, as I wasn’t sure how quickly they’d recover from Wednesday. My watch was showing quite slow lap paces at times but I knew the tree-lined paths might be affecting it so tried to concentrate on running to feel. I’ve let incorrect pace on watches put me off and spoil performances before so was adamant not to let that happen this time.

The middle section is always the hardest for me in a 5 or 10K, so I tried to knuckle down and ensure I didn’t lose concentration and slow. I was pleased to go through 5K in 20:13, technically a 5K PB, with a split time of 3:59, however the next kilometre took 4:26 so I’ve a feeling the 5K board was slightly misplaced. Nonetheless I knew a PB was on as long as I kept going. The final 3K lap went by surprisingly fast and before I knew it I was approaching the finish line. I mustered as much of a sprint as my legs could manage at this stage, passing a couple of people and crossing the finish line in 41:25, a PB by almost 1½ minutes.

I can’t recommend this race enough – great course, London Frontrunners do a great job at organisation, the bag drop was fast well-run, and it’s a really friendly atmosphere with a BBQ party afterwards (and clubbing at G-A-Y later on if you’re so inclined, and not totally knackered by the race). At £18 with a medal and t-shirt, it’s also pretty good value for London. 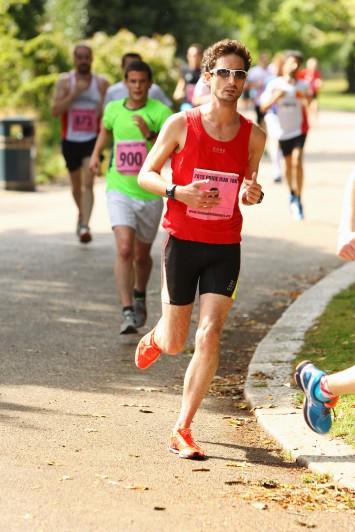