The Worthing HM takes place up and down the seafront – you actually run up and down twice during the race which makes it very good for seeing friends and family multiple times along the course. The route is almost entirely flat, and although there is a slightly twisty section when you head up in to town I’d say it’s a very good course for a PB.

I didn’t really see much of the race village as I was staying close by, so went out for my warm-up run and rocked up to the start line about 10 minutes before the start. There weren’t any starting pens, but there were pacers starting from 1:30 goal time which helped people separate out and in general there weren’t too many slow starters at the front of the pack.

Unfortunately when the microphone was handed to the mayor to start the countdown he decided to launch in to a speech thanking everyone under the sun, which didn’t go down too well with the crowd who wanted to get racing. It didn’t take long for people to start booing and try to begin their own countdown. Thankfully he eventually shut up and we were off.

The first mile or so headed west down the seafront, and I found myself just behind the 90 minute pace group. I was aiming to run this at marathon effort, with my goal being 7:03 min/mile (3:05 marathon pace) if I could manage it. I therefore expected the 90 minute group to slowly pull away but to my surprise I was able to keep with them, and repeated checks of my heart rate confirmed I was well within marathon effort, so I figured I would stick with them and see what happened.

In miles two and three we u-turned back east along the seafront, with a small detour up around a loop before heading along the seafront again and then up in to town. These four miles up in the town were fairly quiet and non-descript, but there were quite a few pockets of supporters given it’s a fairly small race going through mostly residential bits of town. There were also a few twisty sections as we weaved between roads but nothing that broke your rhythm too much.

Before I knew it we were past seven miles and back out on the seafront, and to my amazement I was still with the 90 minute group and still feeling very comfortable. The route was very simple now – three miles out to Goring and three miles back the way we came. The first three miles felt very good and I soon discovered why as we turned around and in to quite a stiff breeze that would continue to fight us for the remaining three miles.

I knew at this point I had a choice to make – maintain marathon effort, which would mean my pace dropped a little against the wind, or push a little to ensure a sub-90 time. I had a chat to the rear 90 minute pacer at around mile 11 (the first time I’ve ever been able to chat comfortably at that point of a HM!), who confirmed that he was on 89:50ish pace, and the pacer 50m ahead was aiming for 89:30, so I decided to go for it.

I made a push to make up the 50 meters to the next group ahead and then knuckled down to finish off these final two miles. Strava shows my pace going 6:48, 6:45, 6:42, 6:40 for the final four miles, a nice steady increase in pace. My final sprint wasn’t as fast as it might have been as the finish line was quite unusual – a very narrow section of the prom that was fenced off to be barely wide enough for two people to run side-by-side, before it widened slightly in the final few dozen meters for the finish line. I didn’t want to take any chances so stayed cautious while passing through.

This is probably my only real criticism of the race – the final few miles were on the prom to allow them to reopen the main road earlier, and while I can understand why they do this it did mean you had a lot of runners up on a path that is also very popular with walkers. I didn’t have any issues but my friends saw the guy in 3rd or 4th place almost get taken out by someone – which at the pace the front runners are going at would not have been pretty!

Regardless, I crossed the finish line in 89:28 and was over the moon! I didn’t expect to run anywhere near a PB – if I’d have managed 7:03 min/mile pace I’d have been very happy – so to take two minutes off it was amazing. My heart rate was very steady until those final few miles when I made the decision to push, and I felt very comfortable, all of which is a massive confidence booster and a nice reassurance that my training is paying off.

Overall Worthing HM was a good race, with great PB potential, and if they can sort out those final few miles on the prom, and the narrow finish, it would be hard to fault. 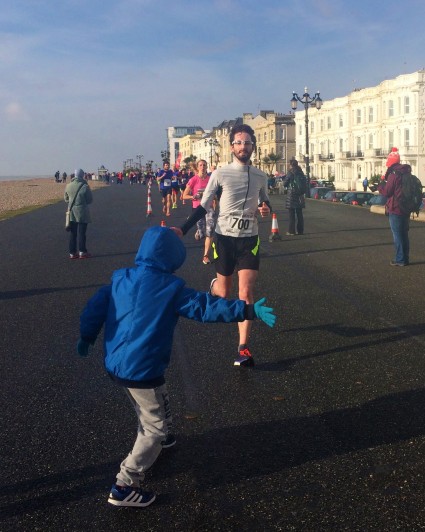