After running a couple of decent half-marathons during marathon training earlier this year, I picked out the Swansea Half so I could have a decent crack at a HM with slightly more rested legs, in the hopes of brining my PB down further. Training started slowly after Brighton, but in the past month things have definitely clicked back in to place and I’ve been putting in some decent training and big mileage weeks. I was therefore confident a PB was on, in a perfect world around 1:25, but certainly somewhere around 1:26.

I nearly went to university in Swansea, and holidayed in the area several times as a kid, so it was nice to return to the town although very little jogged any memories. I didn’t get a great nights sleep prior to the race thanks to a dodgy air con unit that decided to turn itself up to 25º in the middle of the night, but nonetheless felt good when I got to the start line, after a gentle two mile warm-up along the seafront. Weather was reasonable, if a little breezy and rather humid.

The start was well organised, with corals well signposted and strictly enforced based on predicted finish times. Unfortunately the start was delayed by 15 minutes due to parking problems, but after putting up with a Welsh choir for a few songs (not the most adrenaline pumping music for a start line) we were ready to go. I was somewhat surprised to find CJ from Eggheads stood next to me. Somewhat without warning the start air horn was sounded, and we were off. 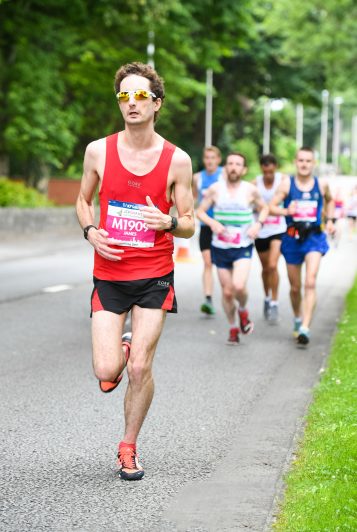 After the usual hectic sprint I settled in to a comfortable pace. I had entertained the idea of hitting 1:25 but quickly decided that might be pushing things a bit too much, so aimed for 1:26 pace, 6:33 min/mi. Following a slightly hot first mile at 6:18, we hit the seafront road and I settled down, hitting 6:35, 6:34, 6:31, 6:29, 6:27, 6:31 as we reached the turnaround point out in the Mumbles. The wind was against us but I tried to work with the people around me to shield myself as much as possible, and things were feeling hard but sustainable.

As we rounded on to the seafront path to head back in to Swansea I was thinking to myself how steadily paced I had covered the first half, when I suddenly realised out of nowhere my pace had dropped nearly 10 seconds per mile. Initially I hoped it was just a GPS glitch, but passing the mile marker confirmed I had indeed dropped to 6:42 for mile 8 despite still feeling good. I tried not to panic too much, and push just a little harder to try and get back on pace, but the legs struggled to respond and I went through the following miles in 6:38, 6:46, 6:44. I knew anything starting 1:25:xx was slipping away now, but pushed on still hopeful of a PB. 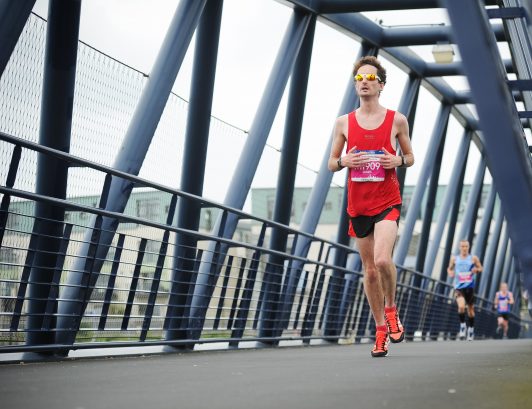 Mile 12 involved a few tighter corners as we negotiated Port Tawe and a few bridges, so I wasn’t too worried to see my pace drop further to 6:51. However as we crossed Sail Bridge my legs started to feel a bit like jelly, and my pace dropped below 7 min/mi. This also unfortunately coincided with the only real uphill section of the course as we headed up back towards the finish line, and although I tried to press on the legs weren’t listening and I could see my PB slipping away.

I struggled on, and as I rounded the final corner and saw the finish line in the distance I glanced at my watch. It had just turned 1:26, so I realised a small PB might still be on if I sprinted. I pushed as hard as I could, with the help of a good crowd along the finish line, and did muster a decent finishing speed. However it was too little too late and I passed the line in 1:27:07, six seconds outside of my PB. 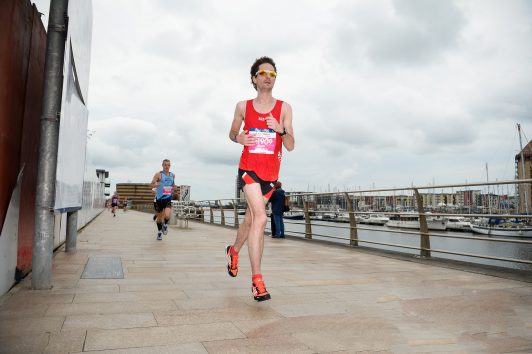 I was pretty gutted with the result, especially as things had seemed to be going so well. I think I’m pretty good these days at judging effort levels and what is sustainable, so don’t think I was massively overcooking things in the first half. My breathing was controlled and the effort felt comfortable, but alas it seems it wasn’t to be.

There are a number of factors I can see might have affected my performance. The weather was a little breezy, and also very very humid which no doubt made life a bit harder than it would have been on a cooler day. I also hadn’t slept well for a few nights leading up to Sunday – indeed following the race I felt absolutely wiped out which is unusual and suggests I was more tired than I realised. I have also been covering a lot of miles recently, so while I felt rested after a taper week, perhaps some residual fatigue was still in the legs.

On the positive side it was a great race – well organised, with decent crowd support along much of the route and a nice flat course with lovely views. I’m also pleased to say I comfortably beat CJ from Eggheads! 😁 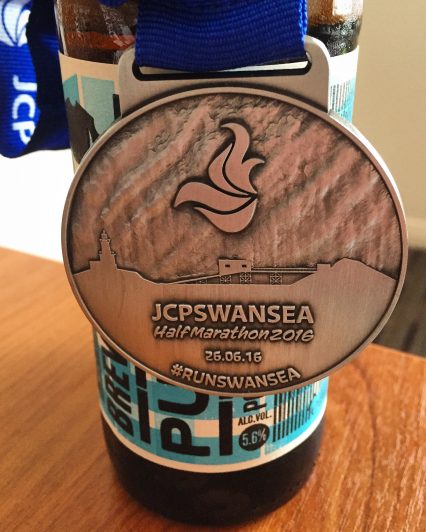 After a day or two of reflection I’m still disappointed not to have hit a PB, but coming around to the fact it was still a reasonable performance. My legs felt pretty good the following day which is a positive sign, and if nothing else the race was a very good training run. Sunday clearly wasn’t my day, and with better conditions and more sleep I’m sure I could have beaten my PB. I’ve now got a few weeks more solid training to put in before I go for a 10K PB at the end of July. Onwards and upwards!