Sunday was the inaugural Bright10 10 mile race in Brighton. The race uses a similar course to the half and full marathon than runs in Brighton, up and down the seafront. Having never ran a 10 miler before, and loving Brighton, I thought I’d give it a go!

The race started on Hove Lawns at the western end of the seafront. I arrived about 15 minutes before the start to find a small, well organised race village – I didn’t use the toilets or bag drop but both seemed efficient and no awful queues or anything. Made my way to the start and tried to slot in somewhere towards the front, but without getting in the way of the speedy club runners. The PA was great as they only made necessary announcements rather than the constant blathering some races have!

At pretty much dead-on 9am the horns went and the race was off. I found myself chugging along at 6:25-6:30 pace, a little faster than the 6:36ish I had initially planned but I felt ok so decided to see how I got on. I was in a group with a bunch of runners from a club but as they slowly upped the pace I decided I was best easing off a bit and let them get away.

The first three miles takes you on a loop around Hove Lawns, back through the finish line and then out towards the pier. After the slightly hot first mile I settled in to my target pace feeling good despite having a slight breeze to work against as we headed east. Miles 4 and 5 slowed a little as we headed up on to Marine Parade and past the marina, but I knew the last half was largely downhill and I’d have the wind behind me, so concentrated on pushing on. There’s a tough little hill as you head towards the halfway point, but nothing too soul destroying, and I stayed within 6:42-6:46 pace for miles 4, 5 and 6.

I was feeling good at this point, knowing the toughest part of the course was over and I just had to push on. However on the downhill heading to the seafront at about 7 miles I felt a stitch coming. I never really get stitches, so to have another come in towards the end of a race again (as happened at the Bristol Half) was really annoying! The hill helped me keep the pace steady but my heart rate dropped 10bpm and I was struggling to keep the effort level up. Some controlled deep breathing helped ease the stitch a little but I never quite shifted it after that.

Combined with not having many people around me at this point, it made for a slightly tough last few miles as I tried to ignore the stitch and keep running as fast as possible, fighting negative thoughts about easing back as the stitch had ruined a chance of a good time. Looking back I actually managed to stay between 6:36 and 6:44, no doubt helped by the breeze now being behind me, but it felt much slower and the heart rate shows I wasn’t pushing as hard as I could have without the stitch.

I cracked on though, and after a final lap of the Hove Lawns the finish line was in sight so I mustered as much pace as I could, and finished in 66:21. This was right around what I thought I was capable of so I was pretty pleased given the stitch. I really thought I was losing tons of time on those final few miles but it just shows you should always push on as best you can. Could I have broken 66 minutes without a stitch? I think probably, but still it’s a decent enough time – and as I’d never ran a 10 miler a guaranteed PB.

Overall I was impressed by the first running of this race. It’s well organised, with a nice course out and back along the seafront. Although there are a couple of small hills and inclines it’s largely flat and a fast course, as proven by Ben Siwa who won in 47:04. And any excuse to visit Brighton is good for me! 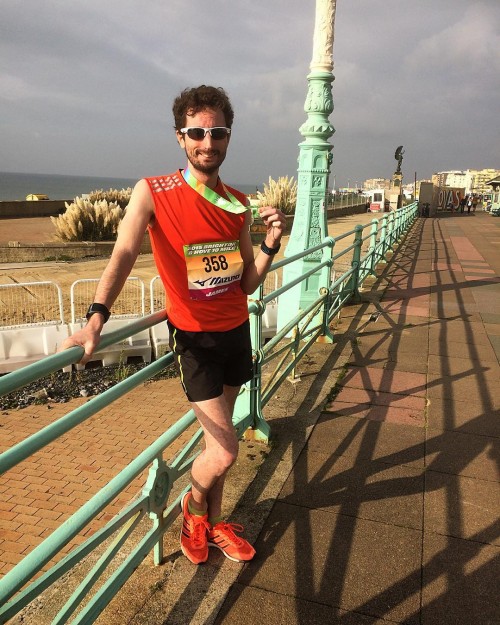