My first marathon! Training had gone reasonably well, if not perfectly. I had chosen to do the P&D 55-70 mile a week plan, which was fairly ambitious with a much heavier training load than I had done before. I had some very good weeks and completed almost all the long runs. The midweek medium-long runs were tough but definitely effective – they made the weekend long runs not as daunting, and I happily completed 21, 22 and 23 mile long runs without any issues. I did however also have some poor weeks for personal reasons, and skipped a lot of the speed work in the plan. I definitely know where I can improve next time!

Anyway, today came around before I knew it. The Brighton Marathon is well organised and I didn’t have to wait long to collect my race pack at the expo despite arriving on Saturday afternoon. This morning the race village was also well organised, the luggage trucks were quick to take your bags, however I don’t think there were enough toilets for the volume of people and the queues were really long. I eventually got to the front of the queue five minutes before the start of the race!

Weather was pretty perfect – warmish 10 degrees or so, hardly any cloud, and a little wind but nothing to cause too much concern. The start is probably the hardest part of the course with a bit of a hill up around Preston Park. It was very congested resulting in a slow first mile, but I knew this was a possibility and also knew I had plenty of miles to make up for it so tried not to get too frustrated, and not waste too much energy weaving. Things gradually eased over the next few miles and after that it wasn’t an issue.

The first six miles flew by as we weaved around Brighton town centre, with lots of great crowd support. We then headed out along the coast past Brighton Marina and beyond. Even on the short out and back up towards Ovingdean there was a good amount of support. Before I knew it I was back in Brighton and passing the half way mark. I had managed to maintain fairly steady pace around my goal of 8 min/miles, and still felt ok but knew the next half was going to be much tougher!

My legs started to ache a little as we did another out and back up along Church Road. It was a shame to be leaving the coast for this 4-5 mile section but the strong crowd support really helped. I had now hit 20 miles and I was beginning to understand why they say a marathon is a race of two halfs – the first 20 miles and the last 6!

Unfortunately the last six miles lead you in to the worst part of the course where you run through an industrial estate and around an old power station. This was also the most exposed section of the course to the wind, and unfortunately I did start to slow here after running fairly consistent 8 minute miles until this point. I knew I just had to concentrate though, and was determined not to walk at any point!

One great feature at mile 23 was a giant screen which played video messages your friends or family had recorded for you at the expo the day before. I didn’t know my friends had done this, so seeing them cheering me on was a big surprise, and a massive boost just when I needed it. The last three miles take you along the sea front, the the pier (and hence the finish line) slowly getting closer which is both a good target to see, but also frustrating as it doesn’t get close fast enough!

Rounding the corner by the pier it was a little annoying to see the finish was actually a good 800m further down the road, but I pushed on and finished in 3:33:42. My legs felt totally wasted and it was a slow, awkward walk through the finish to meet my friends on the beach. Overall I’m pleased with my performance for a first marathon, and I definitely know how I can improve my training if I decide to do another.

Who am I kidding, when I decide to do another! 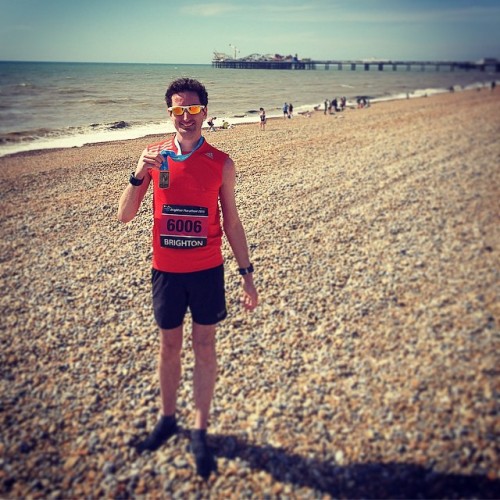