Another week, another race! Following on from the Worcester 10K I had high hopes of another good performance, although I was also cautious as it was coming at the end of two of my highest ever mileage weeks – nearly 180 miles in total! The legs had recovered well from the 10K though, so I was eager to see what I could do on the streets of Bristol.

The weather unfortunately wasn’t ideal, and I was absolutely drenched on my two-mile warm-up along the Harbourside. After a quick pit stop at a nearby pub where I also managed to dry out a little I lined up on the start, just behind the fast club runners and elites. The start was dead-on time and before I knew it we were heading out towards the Avon Gorge. 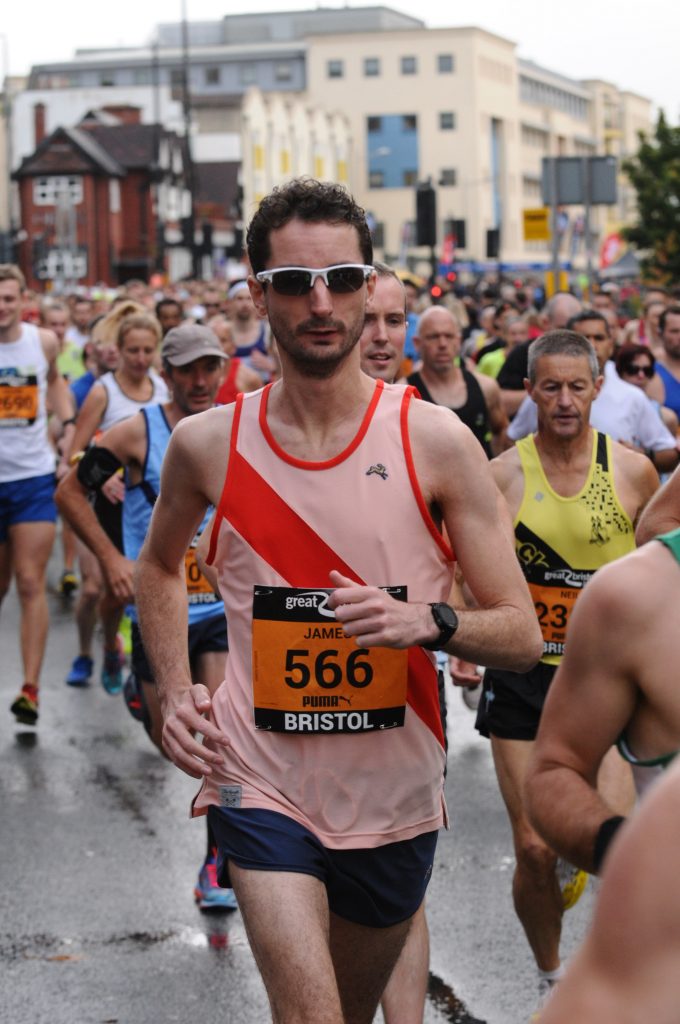 My main priority at the start was not to zoom off too fast, so I made a conscious effort to keep things controlled and resist the temptation to overtake too many people. This strategy worked well and I passed through mile 1 in 6:32, right around the 6:30ish pace I was hoping I could manage, and with the heart rate nicely under control. Legs were feeling good, and I was hopeful a PB was on the cards all being well.

The first half of the course takes you out and back along Avon Gorge, and under Brunel’s famous Clifton Suspension Bridge. The road undulates a little but is fairly flat, and I was happily ticking off the miles while feeling nicely in control. Miles 2 and 3 both passed in 6:31, and I reached the mile 4 turnaround point after a small hill in 6:35. The occasional shower ensured we were never very dry, but to be honest I was thankful of the cooling rain.

Coming back down the hill in mile 5 yielded a 6:29 mile, and as we headed back towards Bristol miles 6 and 7 came in right on pace at 6:32 and 6:31. The breeze picked up a little as we headed back, but it never felt as strong as the 30 mph gusts I had seen forecast. Bristol is a fairly competitive race so thankfully I had plenty of people around me, so tried to draft as best I could to avoid the wind.

Having ran this race last year I knew this is where the real work started, as the course becomes a bit more twisty and with a few more hills as we enter Bristol and wind around the city streets. I successfully navigated the twisty section where you head under an overpass and we headed out on to Spike Island passing mile 8 in 6:35.

The mile and a half along Spike Island can be a bit of a slog as you’re reaching the tough final quarter of the race and after the big crowds as you enter Bristol from the gorge, it suddenly becomes a lot quieter. However this year there were quite a few pockets of support, which was especially impressive given the poor weather. I knuckled down knowing that I should hopefully see my family and friends at mile 9, and I was still feeling pretty good as I passed the mile marker in 6:33. 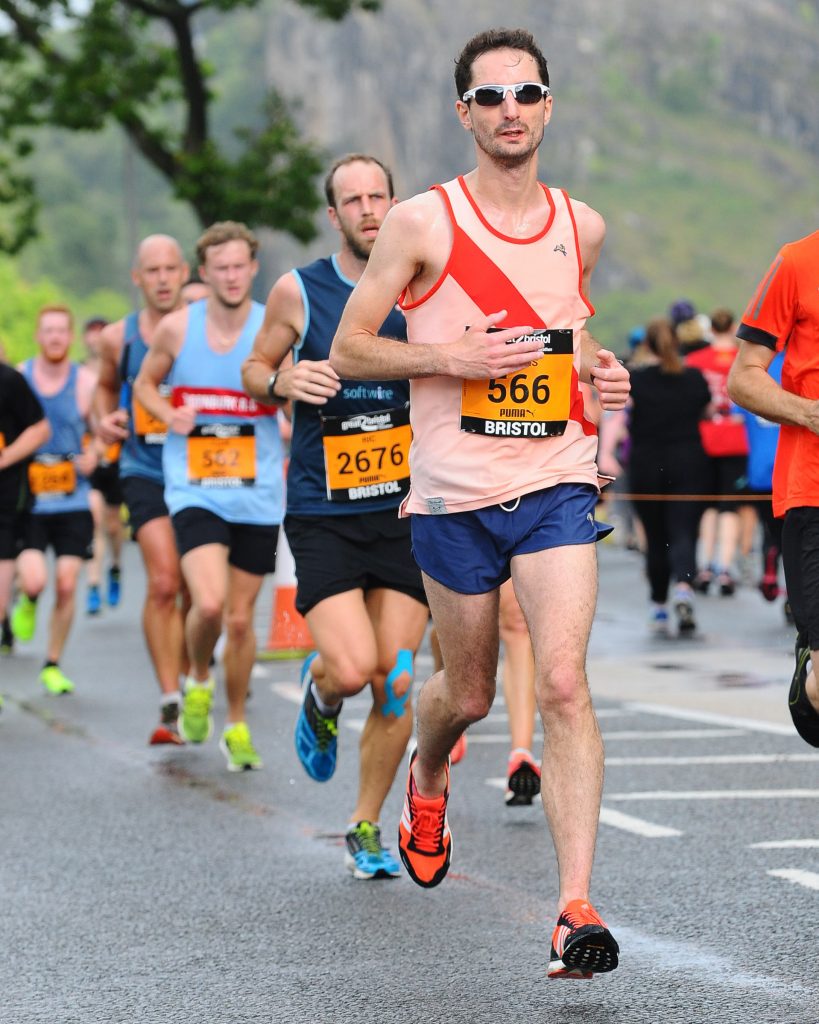 I spotted my nephew shortly afterwards and took a wide line to high-five him. I felt a great adrenaline boost after this, but unfortunately things began to fall apart shortly afterwards. The final few miles feature a few short hills which are by no means major but aren’t really ideal in the last part of a half marathon, and the mileage in my legs really began to show. I struggled up the first incline, feeling like I had absolutely nothing in my legs, and slowed to around 7:00/mi pace.

I made up some ground on the hill back down, but already knew at this stage that the next 20 minutes probably weren’t going to be much fun. I covered mile 10 in 6:38 which was actually faster than I believed I was going at the time. I thought back to previous races where I’ve had tough moments like this and realised after the fact that I wasn’t doing as badly as I thought, so tried to dig in and just push on as best I could. The legs didn’t really want to respond, and every slight incline felt like a struggle, but I tried as best I could to keep them turning over well.

Mile 11 went by in 6:41, again better than I thought at the time – I think I had become fixated on sometimes seeing 7 min/mi on the lap pace, and had stopped paying as much attention to the mile splits. Nonetheless I knew a decent PB was still on the cards as long as I didn’t give up, so continued on as fast as I could get the legs to respond. The twisty section around Queen Square didn’t really help my attempts to keep the pace up, and indeed I slowed to 6:52 for mile 12. 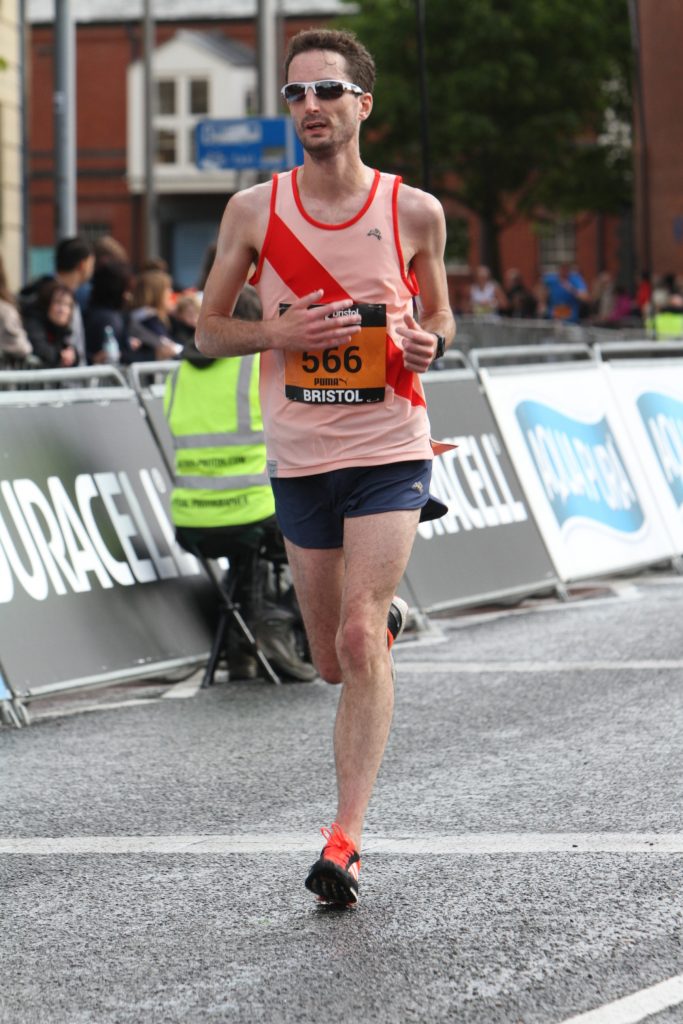 I knew the end was nearly in sight now, and was starting to feel a bit better again when what felt like a massive gust of wind hit me as I rounded on to Broad Quay. I imagine in reality it was a slight breeze, but at this point it was the last thing I needed! Thankfully it died away as fast as it came, and as I rounded the final u-turn I knew the finish line was just a few hundred meters away. 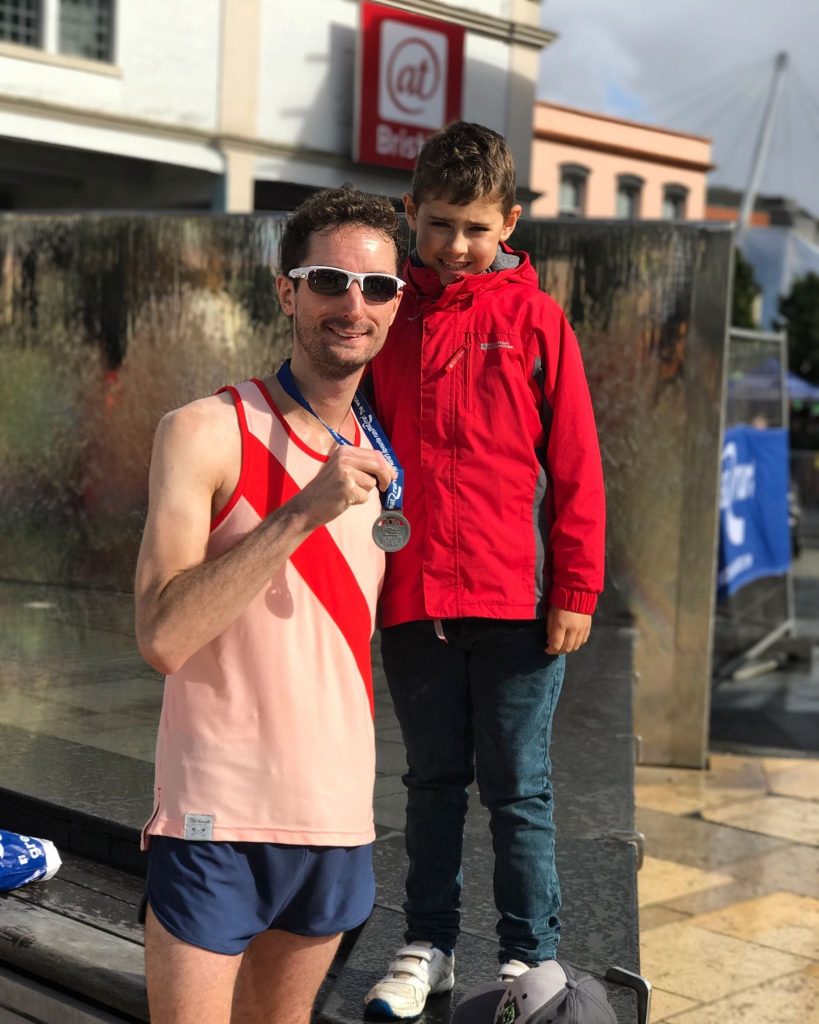 I knew going in that running this completely untapered was a gamble, and that I risked having the mileage catch up with me, but overall I’m happy with the performance and pleased I dug in towards the end and didn’t massively drop off the pace and give up a good PB. Frankfurt is and always has been the main goal, and at the very least this was a good training session and excellent practice for the mental toughness I’ll need there next month.