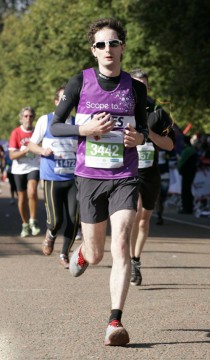 My first half marathon! Training had gone well, although I came down with a cold and a cough a week before which was a bit worrying. Thankfully though I was back to full health in time for the race, and it may even have helped me as it forced me to rest more than I might otherwise have been tempted to.

It was a cool but bright morning, London looking absolutely beautiful in the crisp autumn sunshine. Arriving at the start area I was a bit concerned about the huge queues for the toilets, so headed further down towards another set. This turned out to be a terrible idea, as the queues were even worse! I eventually found some urinals to use, and made it to the start with just a minute to spare. The race was otherwise excellently organised, but the toilet situation was a bit poor – the Bupa 10K was much better provisioned.

The start was very crowded and I was concerned to find myself near the 2:00 pace maker, given that I was aiming for 1:50. I tried to skip ahead of as many people as possible as we slowly made our way towards the start line, and with about 5 minutes already on the clock I set off.

The first mile felt very comfortable, and I was concerned to see I covered it in 8:27, although looking back at the data now I think it’s possible the first mile marker was a little long. Seeing the 8:27 mile caused me to panic and pick up my pace a bit and I did mile 2 in 7:36. After that I managed to settle in around the 8 minute mark, and although this was far faster than my original plan of aiming for 8:20, it felt comfortable so I decided to stick with it and hope I could hold on.

Running along Embankment in the sunshine was absolutely lovely and definitely my favourite bit of the race. Before I knew it we were heading down Whitehall and along The Mall back towards Hyde Park. I found the second half around the park a little tougher, with the winding course that doubles back on itself a few times feeling a little repetitive at times, although the support from the crowds was amazing and definitely helped me keep my pace up.

I had a bit of a blip at mile 10 when after slowing up at a tight corner my legs felt a bit heavy and I struggled to get back in to my previous pace. I finished that mile in 8:22 and worried a little things might be starting to fall apart. However with the help of the crowds (I’m definitely glad I got my name printed on my vest!) I dug deep and managed to finish the next two miles in under 8 minutes.

At the 800 meter to go sign I could see the finish line, but it looked like the longest 800m I have ever seen. I knew from my splits that I was on for a good time, well under my 1:50 target, so I did my best to keep the pace up and even managed a slight sprint for the last few meters.

When I looked down at my watch I couldn’t quite believe the time it was showing – 1:45:17, nearly five minutes faster than my original goal time! I was absolutely over the moon, with a huge grin on my face. Knowing what time to aim for was difficult as I’m still pretty new to running, but while I knew 1:50 might be a little conservative I never dreamed I’d be capable of anything close to 1:45. My chip time actually turned out to be 1:45:15 – a first HM time I’m very proud of.

I’m now looking forward to planning my training for Brighton and Berlin half-marathons in the spring. I was originally thinking 1:45 might be a time I could aim for at one of those, but now I think I might have to go for 1:40 in Berlin!