After ten weeks of solid marathon training, including four 100 mile weeks and just one minor hiccup where I feared I had broken my toe, it was time for my first race of 2017 – the Worthing Half Marathon. I ran the inaugural race last year and ended up accidentally running my first sub-90 half when I was only planning to run a 1:32ish marathon-pace session, so I knew the fast, flat course could offer the potential to PB if the conditions were right. My plan was to see what the weather was like on the day, and either race it or run it at MP depending on the conditions. I am also running the Brighton Half in two weeks, so that offered an alternative if the weather wasn’t conductive to fast running.

Unfortunately the build-up to Sunday wasn’t great. I had a rubbish medium-long run on Tuesday where I felt very flat and the effort felt hard for the pace. Things improved slightly on Wednesday when I had a really good intervals session, but then on Thursday I had my first swimming lesson since I was in primary school. I hadn’t anticipated quite how different swimming is to running on your leg muscles, and ended up getting massively tight calves, so bad that on Thursday evening I could barely stand up straight! Thankfully they did gradually ease over the next few days, but even on Saturday morning they still felt a little stiff.

However the worst part of the week was that my father, who is currently recovering from a fairly major operation, came down with some kind of blood infection. This resulted in a stressful time running him around for tests, picking up prescriptions, and generally worrying about what on earth was wrong with him. On Saturday evening I felt rather drained, and my head wasn’t really in the zone, so I had pretty much written off the race as an MP session. I figured if I could at least get a decent session out of the weekend, I could hope for better things at the Brighton Half. 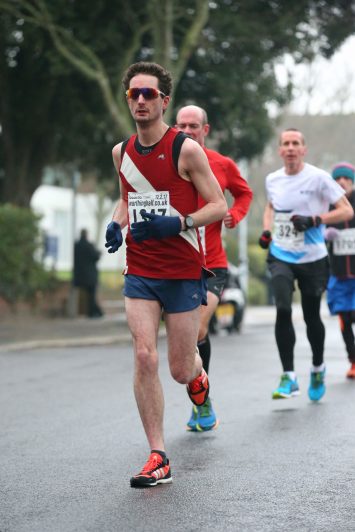 However, after a good nights sleep I awoke on Sunday feeling refreshed and more positive. I did a gentle three mile warm-up along the prom with a few strides, and was surprised to find the wind didn’t feel quite as strong as the forecast had suggested it would be. It was still there, but it wasn’t going to be a complete nightmare. I started to wonder if I should seize the moment and race, although I was still a little unsure. I met an online running friend at the start line, who gave me a bit of gentle encouragement to go for it, so I figured I would head out fast and see how I felt after a mile or two.

As the start neared I dumped my cheap Asda jumper, and before I knew it, we were off. After a slightly crowded first few hundred meters the pack began to spread, and I picked my way around a few slower runners as I gradually upped my pace. The legs were feeling good, turning over without much effort, and my breathing felt very controlled. I knew the wind was behind us at this point, and this would be the easiest mile of all, but nonetheless I was feeling like I had the possibility of a strong race. 6:18 for the first mile – faster than the 6:29 I’d need to average for a sub-85 time, but the first mile is always fast, and I wasn’t pushing hard, so I wasn’t worried. 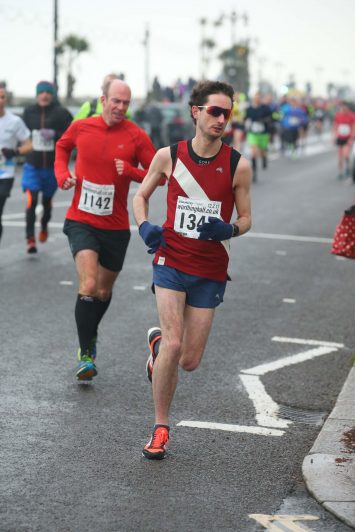 In mile two we looped back and down along the seafront in the opposite direction, which would be the first indication of how the wind felt at race pace. Thankfully it didn’t feel too strong at all, and I was able to use other runners around me to shield from the worst of it. I’d settle in behind one person for a bit, then move out and bridge over to the next. Everything was still feeling very controlled, so I knew I just needed to ensure I didn’t get carried away and overcook things early. Mile two was 6:23, still faster than I had planned but as things were feeling good I wasn’t going to complain.

We then turned up in to town for the first of five miles weaving around the centre Worthing. The field around me had thinned out in to several small packs now, so I did my best to hang on to them while being careful I didn’t push too hard to do so. Happily there was a bunch running around the 6:20-6:25ish pace I seemed happy at, so I was in a good position to settle in and just start ticking off the miles. I knew the important thing at this stage was to ensure I wasn’t pushing as I’d need some reserves for the final three miles in to the wind at the end. I happily weaved around Worthing in 6:27, 6:24, 6:20, 6:23, 6:23, and in seemingly no time we were back out on the seafront with less than half the race to go! 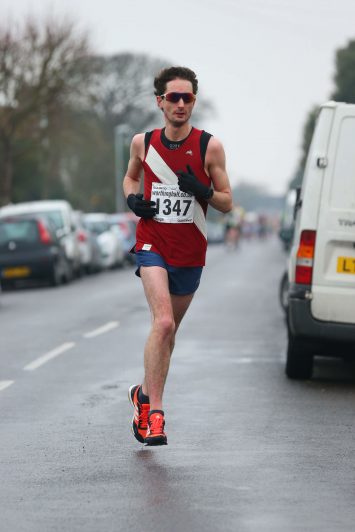 I was experimenting with a new pacing app on my Garmin which gives predicted race finish times, while allowing you to correct for GPS error by tripping the lap button at every mile marker. This was predicting a low 1:24:xx finish time, even sometimes drifting in to the 1:23:xx range, which was quite exciting to see. I knew I still had a long way to go and I might slow towards the end, but I was still feeling really good so my confidence in the chance of a PB was growing and growing.

In the last few half marathons I have run, by this stage my breathing pattern had switched from three steps in, three steps out, to two steps in, two steps out. I was still happily chugging along on a three step pattern though, so I was fairly confident I was running at a sustainable pace. My aim was now to try and maintain this for as long as possible, before the turnaround at mile 10 when I knew I’d need to put the hammer down to battle the wind we’d be turning in to. With the wind behind me and feeling good, I put in a solid three miles in 6:20, 6:19, 6:20, while still keeping the effort well under control. The legs were starting to tire a little, but it just required a little more concentration to ensure the pace didn’t slow. 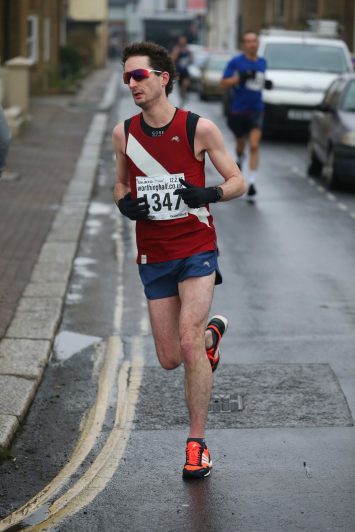 As we approached the turnaround I tried to mentally prepare for the harder final three miles. I turned in to the wind and upped my effort slightly to maintain pace. I was working slightly harder but wasn’t having to really push, and covered mile eleven in 6:23. My watch was now showing a solidly sub-1:24 time and still feeling good I was eager to make sure that became a reality. I debated when to really put the pedal down, but decided I’d wait until we were out on the seafront before really going for it, just in case the wind was worse once we were more exposed to the sea.

We hit the seafront road and mile twelve passed in 6:21. I knew at this point a 1:23:xx time was mine for the taking, so gradually wound up my effort. This was helped by some of the runners ahead of me slowing – I gradually reeled in a runner, briefly tucked behind them to shelter from the wind, then moved on to my next target. I was starting to work hard now, and the breathing was becoming more strained, but I knew I only had to keep up this effort for a little while longer. I covered mile thirteen in 6:13 – the first time my fastest mile in a HM has been the last one! 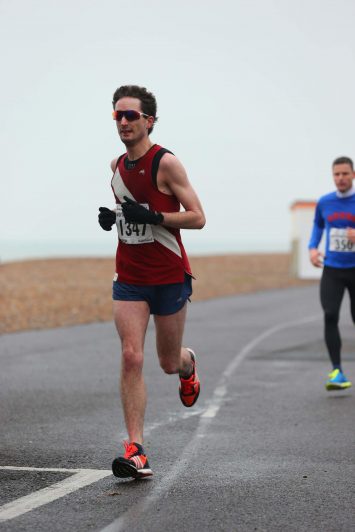 With the finish line in sight I mustered as much energy as I could and ran as fast as my legs would allow for the line – amazingly my average pace for the final 0.2 miles was 5:33/mi! We entered the finish chute (thankfully widened compared to last year) and I saw the clock was well inside 1:24. I’d never felt so strong at the end of a half, and it was so nice to enjoy the final moments of the race, rather than just wishing the race would end! I passed the finish line and a massive grin came across my face as I looked down at the finish time. 1:23:31. 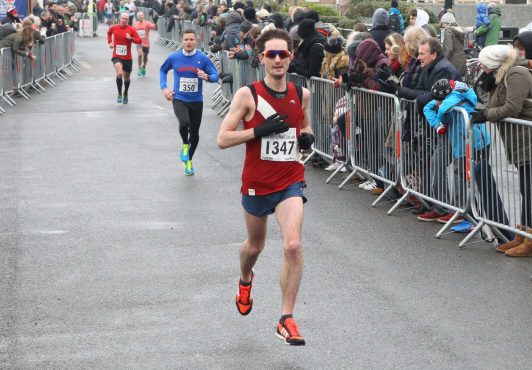 Overall then job done! I am so pleased I went for it, instead of just running an MP session. I thought a high 1:24 time might perhaps be possible on a good day, so I am amazed to dip in to the 1:23s. In training holding 6:30/mi for 6 or 7 miles was hard work, but at Worthing holding 6:20/mi felt easier. I suppose it just shows what race conditions, and a bit of a taper, can do. While preparation wasn’t ideal, the reduced mileage compared to what I had planned actually worked well to ensure the legs were well rested.

The result is a massive confidence booster, and confirms that all the hard work ticking off big mileage weeks was worth it. I’ve no doubt that the massive improvement, and how strong I felt during the race, is thanks to all those miles. It’s been hard work at times, heading out in rubbish weather feeling tired and achey, but the end results are clear and I’ll definitely be using this result as a reminder when I’m struggling for motivation to get out there.

It also gives me much to think about regarding the pace I aim for at Brighton. Some race predicators give a sub-2:55 time based off 1:23:31. I think that might be a little optimistic, but at the same time I definitely think I should aim for something a touch faster than my original 2:59:59 goal. I will be giving it more thought over the next few weeks, while basking in the glory of a great race performance and a big PB… 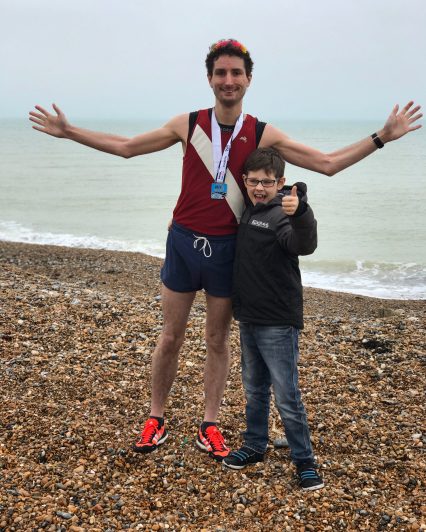